The weather was very rough in Buenos Aires; it had been raining non stop for two days,  which caused quite bad and unprecedent flooding in many areas of the city and suburbs.  hey, we even made the news: http://www.bbc.co.uk/news/world-latin-america-22016255

The venue was nevertheless packed, although it was somehow noticeable most of the audience was there for A Perfect Circle. There was still an overall good response to Tomahawk’s set, and of course there were a lot of hardcore “Mondo Patton” enthusiasts who really intensely enjoyed the show 🙂

Most curiously, media photographers were advised that NO PHOTOS were allowed for Tomahawk and APC sets; the photopit was thus only available for the local opening band (Carajo) and then promptly vacated.  Word has it that this was requested by APC’s management only an hour before doors open; needless to say it was very annoying for professional photographers who are appointed weeks in advance by their respective editors and had to get there in such bad weather only to find they were banned from doing their job.  I just had to let that out, sorry 😛 I myself had a photo pass and was expecting to obtain a few good quality shots for this very page. Maybe next time.

Tomahawk’s overall sound was unrelenting, bone-crushing, and Trevor’s sound made my damned pancreas shake. I literally felt my skin shifting at times 😛

So anyway, here’s the local setlist and a few links with reviews (in spanish naturally). 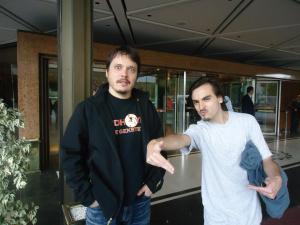 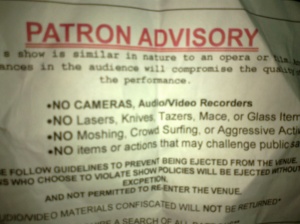 Notice handed to photographers upon entering the venue

http://www.fmrockandpop.com/2013/04/bienvenido-al-mundo-de-los-atormentados/ (not too accurate setlist information)

there was time for them to taste some TRUE (and dangerous :P) local passion:

Lanús vs Quilmes soccer match, rain and all!